Alameda, a 2,200 acre peninsula, was home for nearly 3500 years to a branch of the Ohlone Indians. Luis Peralta received 35 square miles comprising portions of El Cerrito, Berkeley, Albany, Oakland, Piedmont, and Alameda as a land grant in 1820 that was later divided between his four surviving sons. Antonio Maria Peralta got all of Alameda and much of Oakland. 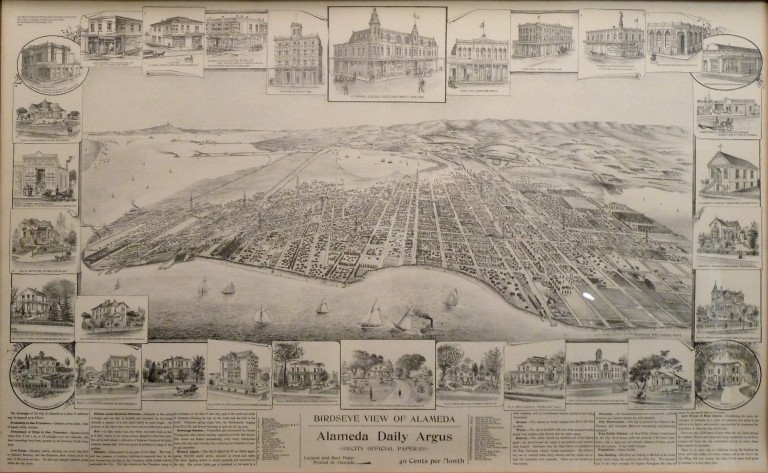 William Worthington Chipman came to San Francisco by way of Panama in 1850, becoming partners and friends for the next 23 years with Gideon Aughinbaugh. They purchased 160 acres, known as “the Encinal” situated east of Versailles St. to San Leandro Bay, for $14,000 from Antonio Peralta in October 1851. There were three separate communities: “Old Alameda”, “the Encinal on lands adjacent” located along the shore of San Antonio Creek (the Estuary) and “Woodstock” located on the west end. Always diverse, settlers included, Italians, Portuguese, Spaniards, Chinese, Japanese, Scandinavians and Germans. They came to farm, to be servants to the wealthy, to build the Transcontinental Railroad (1869), to work as handymen and gardeners, and to work on the Alaska Packers fleet. In 1853, the residents decided on the name Alameda and by 1872, incorporated the three communities under one charter.

1874 saw the first high school and the start of the project separating the peninsula from Oakland, completed in 1902. A wooden cantilever bridge (1874) connected Bay Farm Island’s 30 residents to 1,800 acres at low tide and only 300 at high tide. The first bridge across the Estuary at Webster Street (1871) was replaced in 1900 and again in 1926 by the Posey Tube. Rail and ferry service played a pivotal role in development. In 1884, the Alameda Pier was built, later becoming the transportation connection for rail to ferries known as the “mole” when the Central and Southern Pacific railroads merged in 1894. Shipbuilding began in earnest during World War I by the Moore, Bethlehem Steel, and Todd companies.

A destination for recreation and sporting events, resorts along the coast line provided “baths” for swimming, giant amusement centers, ballrooms and saloons with Terrace Baths opening in 1870. Cottage Baths (1893) had clientele including celebrities like Ethel Barrymore, Al Jolson, Robert Louis Stevenson, and Jack London. Nell Schmidt was the first woman to swim across San Francisco Bay in 3 hours and forever changed swimsuit fashion. The largest resort, Neptune Gardens (1880s), became famous in 1915 under the ownership of Fred J. Croll by attracting thousands on weekends for special events such as boxing matches with John L. Sullivan and Jim Corbett. It became Neptune Beach “the Coney Island of the West” (1917-1939), closing in part due to the new Bay and Golden Gate bridges, where increased use of cars later caused the end of local ferry and train services.

The west end’s first passenger airport began in 1928. Pan American Airways operated the China Clippers for commercial crossings over the Pacific. Here too were the ghostly remains of a once industrial past: Borax Soap Company, Pacific and Standard Oil, and the original terminus for the Central Pacific Railroad. Alameda deeded the U.S. Government land in the west end for an elaborate 100 acre Army Base known as Benton Field, and another deed of 929 acres of tideland and submerged land in 1935, for $1. This marked the beginning of Alameda as a Navy town, with the official opening of Alameda Naval Air Station on November 1, 1940 where the airfield operated for 56 years of continuous fleet support. World War II nearly doubled the population overnight. Today, we are a diverse community on 23 square miles with a population of 76,000.