During the summer of 2021, I had the opportunity to photograph the four Victorian crazy quilts held in the Alameda Museum. These quilts, produced between 1880 and 1890 in Alameda, consist of random patchwork patterns. They follow the tradition of using jewel tones and opulent materials of velvet and satin. As I was photographing the quilts, I noticed that both the embroidered motifs and some of the strips used to piece the quilts had very iconic visual symbolism. One quilt showed two different ribbons placed diagonally across the squares.

In the same quilt, several arrows are visible in the stitching patterns and the motif of an anchor. Recognizing anchor as the logo of the City of Alameda, I began to speculate that the crazy quilt may have been the Victorian version of a scrapbook. Perhaps these special symbols were sewn into the quilt as memories in the way postcards remind us of the special places we have been. Was there a meaning behind the aesthetic iconography used to compose the Victorian crazy quilts? Could they be a memento of an occasion, a visit to a faraway place, or a personal emblem? What did the maker signify by choosing certain symbols, and how were those symbols received by the viewer(s)?

The quilt, is attributed to the Young family, who resided at 2137 San Jose Avenue, Alameda. The household was composed of Emma and James Taylor Young and their two children. Emigrating from England to join her family in America, Emma landed in Alameda in 1915. Upon her Aunt Jennie Groliere’s death, she inherited the home on San Jose Avenue.

Women of elite status during the Victorian era sewed crazy quilts as a leisure activity between the late 19th and early 20th centuries. They did not serve as functional bed coverings. The quilts were assembled of small squares about twelve inches each, decorated all over with ribbon fragments applied in a “crazy” pattern. After composing the ribbon design, the twelve-inch squares were then stitched together in the usual way to make up the full coverlet. However, the construction of each square was markedly different from other quilt-making processes.

Other quilts are sewn together with a margin around the fabric perimeter that gets hidden when the seams are sewn. The quilts figured here were pieced with ribbon-a narrow fabric with parallel selvage edges—and applied, side-by-side, without seam allowances onto a fabric base without directional rule. After placement, the edges of the abutted ribbons were then embroidered to the base fabric using any number of fancy stitch patterns. The embroidery that secured the pieces ranged from small stitch patterns to larger recognizable symbols, like a martini glass, an orange, or the Eiffel Tower. Thus, the symbolism found in the quilts takes two forms: the collected ribbon pieces and the embroidered motifs. 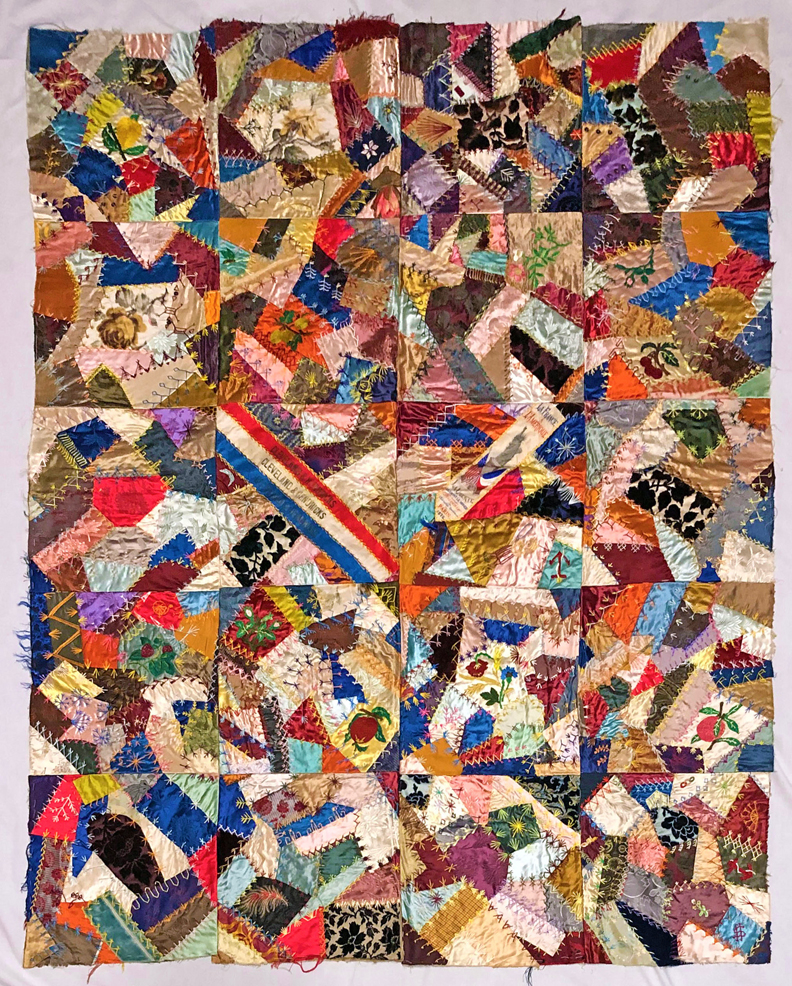 The personalization of a quilter’s work was achieved both in the placement of specially saved and prominently placed fabric memorabilia, surrounded by embroidered imagery. Note the two identifiable ribbon details above. The maker positioned the two ribbons in a central and dominant position. Presumably, the diagonal direction would allow the entire ribbon to be visible. They share a similar color palette of red, off-white, and blue. The ribbon to the left, Cleveland & Hendricks, refers to the 1884 Democratic presidential ticket for Grover Cleveland and Thomas Hendricks, candidates who waged a contentious but victorious race over Republican James G. Blaine. The second ribbon, placed on the right, is printed with: La France, L’Amerique La Liberte Eclairant Le Monde, and is a souvenir from the third Paris World’s Fair of 1878. This fair was significant because it was the first display of the head of the Statue of Liberty, a gift from France to the United States. Gustave Eiffel constructed the metal framework. Ultimately, America showcased the completed Statue of Liberty during a ticker-tape parade at the inaugural of Grover Cleveland.

Though there is no way to ascertain who made the quilt, the campaign ribbons suggest that the seamstress sewed the quilt in America after 1884 and that she supported the Cleveland ticket. She, or someone she knew, had attended the Paris World Fair in 1878. The maker was a woman with the means to travel, collect or procure ribbon fragments, with the leisure time to piece, assemble, and embroider the quilt.

The genealogy of Emma Young suggested some direction of its provenance. Upon her arrival to Alameda in 1915, Emma moved in with her Aunt Jennie Groliere, who herself, had emigrated from Britain and married John Baptiste Groliere, a Frenchman. Groliere obtained his U.S. citizenship in 1881 in Illinois. It is possible that Groliere attended and collected the World’s Fair ribbon before emigrating to the U.S.

Though the campaign ribbon indicates a close connection between the quilt maker and what it symbolizes, how much association is there with embroidered images? There is likely a scale of how closely an individual connects with their icons. Aside from the anchor, the motifs hand-worked on the Young quilt include fresh fruit—a branch of cherries, an apricot, a lemon, strawberries—suggesting youth and vibrance. It is both colorful and skillfully produced. Less-elaborate images such as the penny-farthing bicycle a fan, and a young girl looking into a mirror indicate young female activities. Further research is needed to ascertain the provenance of the quilt, but the symbolism suggests that it was produced by a young woman, perhaps an immigrant, eager to participate in the social and political fabric of American life.

This article appears in the Summer, 2022 issue of the Alameda Museum Quarterly.