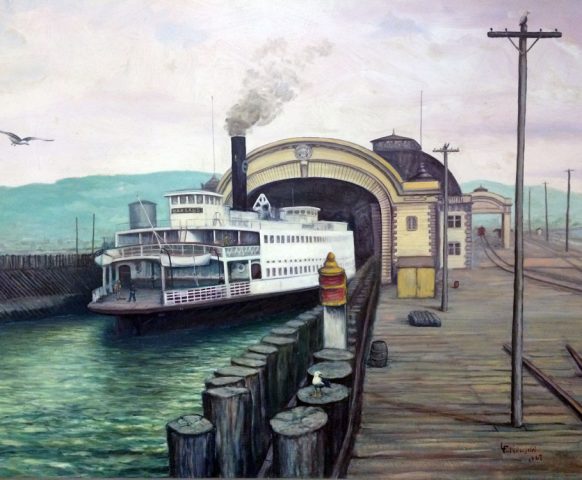 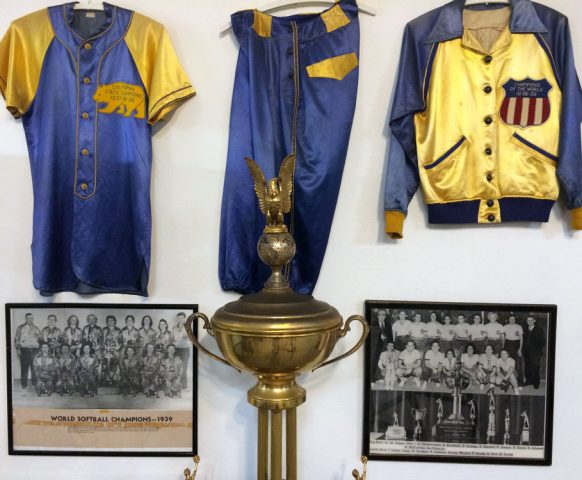 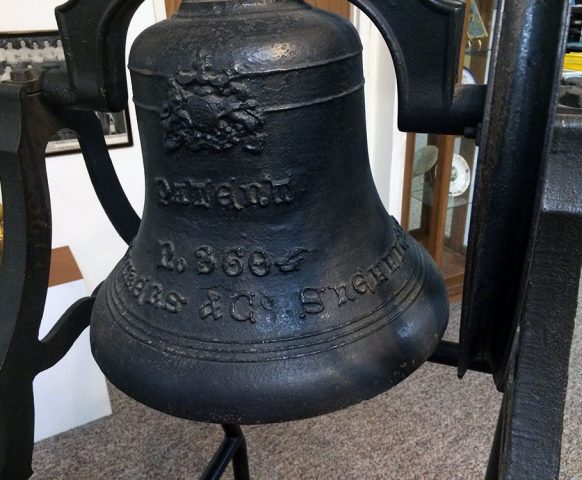 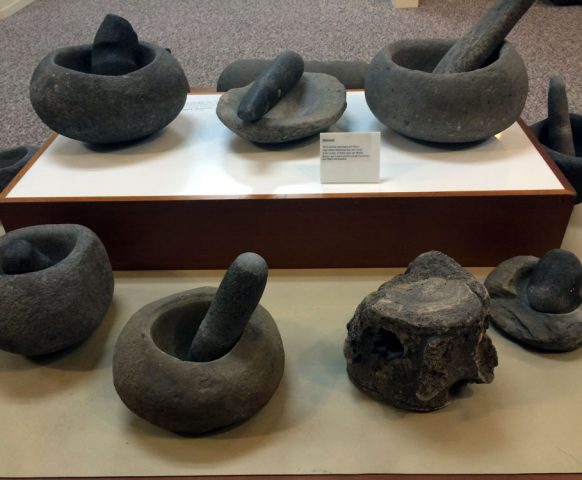 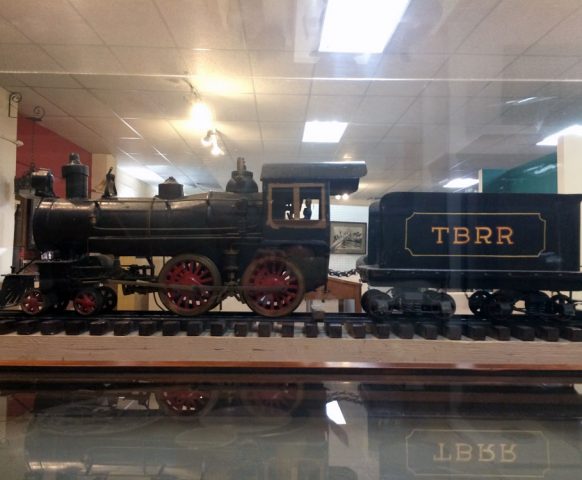 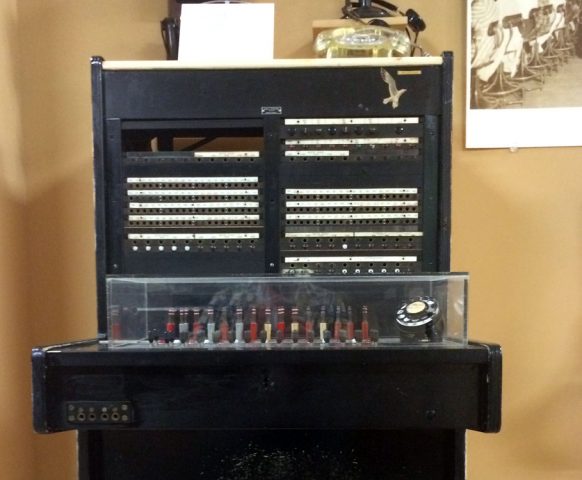 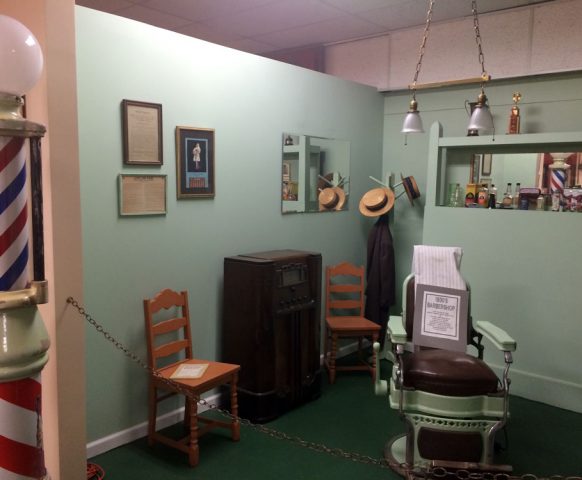 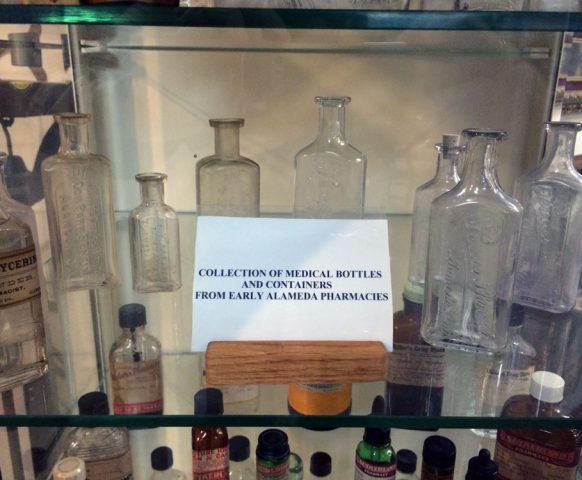 This area is devoted primarily to transportation-related artifacts, and these are the focal points:

The Victorian Era section is the first exhibit within the History Gallery. It consists of period furniture from several Alameda homes.

Neptune Beach, a commercial operation, existed from 1917 to 1939. It was located at the foot of Webster St., at Central Ave.

1920’s Household Furnishings Display. These are the sort of items found in Alameda homes during the heyday of Neptune Beach.

This exhibit has photographs, full uniforms and trophies of this 1937-1939 women’s champion softball team.

These are the furnishings of Frank’s Barbershop, which was located at 2055 Lincoln Ave. The owner of this barbershop was the uncle of former Alameda mayor, Chuck Corica.

The theme of this small exhibit is the presence of telephone service in Alameda. The furnishings and pictures are largely of the period of 1920 to 1940.

All of the many objects on display here were actually used in Alameda during this period and came to the Museum from many homes.

This globe and stand dates back to the Victorian Era; however, the globe itself was recovered in the 1930’s to reflect then-current political boundaries. This globe is known to have been located in the old Alameda Free Library from 1897 to 1903, when the library was located in the west wing of the Alameda City Hall.

This ship model was built in 1892 by a talented local cabinet maker.

An early Alameda industry, located on the estuary, the Alaska Packers Association’s fleet of tall-masted sailing ships went north every spring to Alaska where they fished for salmon and processed their catch at canneries along the Alaskan coast. The canned products were then brought to Alameda for sale and distribution.

Vessels such as this model depicts were the chief mode of transportation from Alameda to San Francisco before the advent of the San Francisco-Oakland Bay Bridge. This model was built for the Alameda Commuters Club, which consisted of men who regularly commuted to work in San Francisco on the 7:30 AM ferryboat.

This wooden cart is thought to have been used City of Alameda maintenance workers during the early 1900’s, primarily for use in the public parks.

This is a scale-model replica of a South Pacific Railroad engine and tender built in 1899 by local resident George Wulzen. The railroad ran from Alameda to Santa Cruz.

The cabinet display contains the contents from the cornerstone of the Artesian Water Works building. An early water company, privately owned, it provided water to the City of Alameda before the advent of the East Bay Municipal Utility District.

The platform display consists of mortars and pestles used for the grinding of meal products. The display case exhibits small artifacts such as arrowheads, ornamental shells, and tools made of bone. The principal items in this collection were excavated in 1908 from a Native American mound that was removed for the opening of Santa Clara Ave. in the vicinity between High St. and Mound St. The Native Americans who inhabited the then-peninsula of Alameda are thought to have been a branch of the Ohlone tribe.

Present-day Alameda is the result of the merger of three townships: the “Town of Alameda” (east of present-day Versailles Ave.); “Encinal” (on the Estuary at what is now the foot of Grand St.); and “Woodstock” (located in the West End). This merger took place in 1872 as the Town (later the City) of Alameda.

These exhibits represent the early volunteer fire companies of Alameda. The Fire Department was founded in 1876 and consisted of volunteer personnel until 1905.

This cabinet, from the office of a local physician, contains medicinal bottles from early-day Alameda pharmacies.

This firm was established in 1886 and, at the time it was built, was the largest building in Alameda. It made architectural pottery and facades, as well as terra-cotta brick, sewer and chimney pipes. The plant was demolished in 1963.

This hand-colored panoramic photograph of Alameda is dated 1893. It was commissioned to represent the City of Alameda in the California Mid-Winter Exhibition, which was held in Golden Gate Park in 1894.

The toys in this showcase belonged to sons of early Alameda families.

Note the fans, purses, ornamental hair combs and hat pins – all of which were worn by women of prominent Alameda families.

This is a grouping of furniture used by early Alameda residents. The gown on display is from the Alameda Museum’s costume collection.

The dolls displayed are largely German bisque dolls that were played with by daughters of prominent Alameda families. The doll house belonged to the Meyers sisters, whose home on Alameda Ave. is now known as the Meyers House & Garden Museum. The two handpuppets are early examples of ‘pinkies’ that were created by the Alameda Hospital Auxiliary, formed in 1954, and given to children receiving treatment at the Alameda Hospital.

Note: the conference table area is where the Alameda Museum Board of Directors meets.