How many of us remember walking on the Golden Gate Bridge when it was turned into a temporary mall as a celebration of its fiftieth birthday? That event was then memorialized at the Oakland Museum in an enormous color print that seemingly showed a picture of every person who ventured there, estimated at half a million.

Turns out that anniversary had a special Alameda connection. Local architect Richard Rutter spent most of the 1980s working for Bolles Associates in San Francisco. The Bolles firm was productive and wide-ranging, designing Candlestick Park, the General Motors Plant in Fremont, the San Jose Campus of IBM, Macys, Dayton Hudson, as well as Gallo and Paul Masson Wineries. 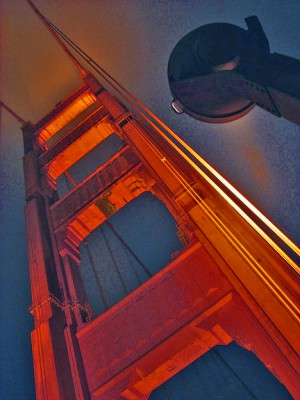 Around 1966, the Golden Gate Bridge, Highway, and Transportation District hired John Bolles to plan the lighting of the Golden Gate Bridge towers. During the Great Depression when the bridge was completed, they had never been lit, due to two lacks, money and lighting technology. After the Bolles study, the project was shelved due to sparse funding, and twenty more years went by. Since 1987 would mark the 50th anniversary of the span, Bolles Associates was asked by the Bridge District to dust off their plans and to design a modern tower lighting scheme. Richard was assigned to manage the project from plans to completion.

The tower lighting has now been in place for twenty-seven years and was the topic of the kickoff museum lecture for 2014. In keeping with the antiquity of the bridge, Richard used an antiquated Kodak Carousel projector to show original 35 mm. color slides taken during the design and construction of the lighting project. Those of us at the presentation wondered nervously whether a forty year old projector bulb would explode in a sparked blaze of glory, but of course it lasted until the end of the show! His talk was also highlighted by a display of original architectural models long in storage. Richard has certainly earned his affectionate nickname of “Dickipedia!”

From: “Twenty-seven Years Aglow,” a talk by architect Richard Rutter about the 50th birthday of the Golden Gate Bridge, given at the Alameda Museum, Thursday March 27, 7:00 p.m. All images courtesy of Richard Rutter.