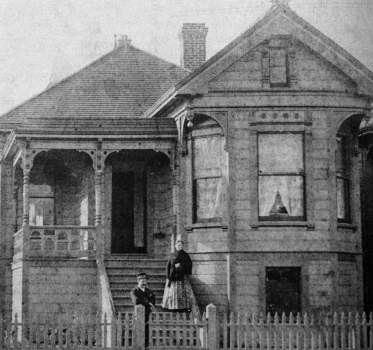 Jonas lived on High Street between Briggs and Sterling avenues. He and his fireman, Edward Colson, were killed when his locomotive, No. 19, jumped the track on Jan. 31, 1899, at the Fifth Street Station on the West End. Railroad employees called No. 19 The Iron Hoodoo, implying the locomotive was jinxed.

On May 22, 1898, seven months before Jonas was killed, No. 19 jumped the track while crossing a trestle. The accident killed the fireman and maimed the engineer. On May 2, 1900, less than five months after Jonas’ death aboard No. 19, the same locomotive derailed on the Alameda Mole, scalding both the engineer and the fireman.

From The Alameda Sun , by Dennis Evanosky.

For those interested in learning more about the railroaders and their families who lived near High Street Station, the Alameda Museum’s board president and Alameda Sun publisher Dennis Evanosky will host a free history tour of the East End and its railroading community on Saturday, June 27.

The tour will focus on the South Pacific Coast Railroad’s train yard at today’s High Street and Encinal Avenue, the railroad’s hotel and the employees who called the neighborhood around the train yard home.

The tour is open to current museum board members and museum and Meyers House docents, as well as anyone interested in becoming a docent or board member. The Alameda Museum is looking for new volunteer docents and board members.

If you love history and want to help keep it alive in Alameda call Evanosky at 772-5209 to learn about becoming a docent or board member and find out the tour’s starting time and place.