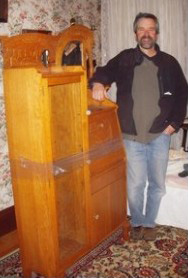 We did it! The Capital Campaign reached the goal of $40,000 by December 31st with the included $10,000 matching contribution from the East Bay Community Foundation (EBCF). Over 100 people donated specifically to the campaign while others rejoined the Meyers House Guild, with those funds also benefiting the house. Several donations of $250 and $500 were received, but it was the Alameda Architectural Preservation Society donation of $2,000 and that of now retired docent Jeanne Gallagher for $2,500 that put us over the top. It all started with Joe Young’s $10,000 in April. The need for capital will not end. If you have yet to make a donation, please do so with a check payable to Meyers House, c/o Alameda Museum address. Thank you to all who donated.

In February, City Council will consider the Alameda Park and Recreation Department (ARPD) recommendation of new Director Amy Wooldrige to turn over the full operation of the Meyers House and Gardens to the Alameda Museum. When the 2012/2013 budget was being approved last year, it was recommended that a non-profit historical group take over the management of the entire place. Due to the final wishes of the Meyers sisters, the house cannot be sold by the City or the Museum, so we started discussions last spring in how best to handle a transfer with EBCF. Consultant Kathleen Brown was brought in to help us. Our track record with repairs and fund raising speaks volumes of our willingness and ability to get the house’s deferred maintenance done. And now we have the Campaign funds.

In 1994 Alameda Museum began creating the house museum portion, spending $30,000, and opening to the public in 1997. The grounds and buildings were the City’s responsibility, so they received an annual grant from EBCF from the Meyers Fund. Unfortunately that was not enough to keep up with all the maintenance. Our museum paid for several improvements amounting to $35,800 with almost $20,000 spent in the last 30 months. Upon transfer, the EBCF funds will come to us. We hope to accomplish more than what the City could get done with these funds because we can get volunteer labor and donations are tax deductible. It will be a challenge, but we are better able to rent the grounds and manage events at the property as some of our key volunteers are neighbors. When the painting is done we will celebrate with a party for donors giving $250 or more. 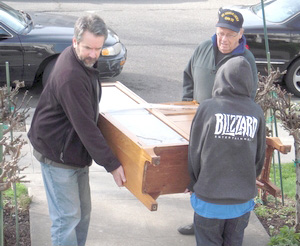 A gorgeous oak side-by-side 1900’s desk was donated to the house by Brad Murphy. A beloved family piece from Hannibal Missouri, we could not accept it into the main museum collection, but it would be perfect at the Meyers House. George knew instantly that it would best serve in the child’s room to better display books, toys and dolls. Brad agreed that the house was perfect for it and he even helped move it upstairs. Check it out when we are open on 4th Saturdays.

We have a new MHG logo reminiscent of a wedding invitation monogram. Frank Bette Center for the Arts has a new calendar for 2013 with October featuring a watercolor of the Meyers House that was generously sponsored by Jeff Cambra, an Alameda Avenue neighbor and active city volunteer. 2013 will be an exciting year for the Meyers House.