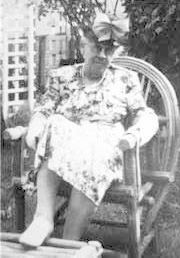 Artists have been known to speak of their paintings as their “children.” If we accept that metaphor, then the Alameda Museum participated recently in a mini “family reunion” that involved a painting located in distant Munich, Germany, and another in nearby Hayward.

It all began when a letter arrived in the Curator’s office from Mark di Frangia, a longtime American resident in Germany, who introduced himself as a great-grandson of Gertrude A. Snow Brooks, a well-known Alameda artist. He kindly offered to donate a painting by her in his possession and also indicated that his brother, Brian Harris of Hayward, would most likely be happy to donate one, too.

This, of course, came as great news to us. Some years ago the mother of these two men, Marilyn Harris, donated two items made by the artist Gertrude Brooks — a carved oak piano bench and an oil painting of a redwood grove. Both items are now currently on exhibit in the newly-opened basement gallery of the Meyers House. So, the addition of two more works by this artist would certainly augment our presentation.

But who was Gertrude Brooks? According to Edan M. Hughes’ definitive reference book, Artists in California 1786-1940, she was born in Vallejo in 1866 and moved with her family to Alameda in 1875. As a teenager she studied art in San Francisco. After her marriage she resided at 1813 Alameda Avenue, and therein she established her studio. Mr. Hughes speaks of her as “a highly skilled painter, her rare works include small oils of the redwoods, still lifes, Chinatown and scenes of the San Francisco Bay area”. She died in Alameda on February 7, 1947.

The painting from Germany, though shipped by air freight, took a good month to arrive due to an extended sojourn with US Customs where the minor damage to the molded frame may have occurred; fortunately our talented George Gunn corrected this problem. The painting is a beautiful still life of a floral bouquet. The painting from Hayward was brought to us in person by Mr. Harris who presented us with an attractive redwood grove scene, probably painted in Muir Woods. He kindly indicated that we might be considered as a recipient in the future of other works by his great-grandmother that he possesses.

So, the next time you visit the Meyers House, stop by the basement gallery and enjoy the exhibit of Alameda’s celebrated woman artist, saying “hello” to her re-united “children.”